Rev Your Engines, Racing Games on iOS are a Hit! 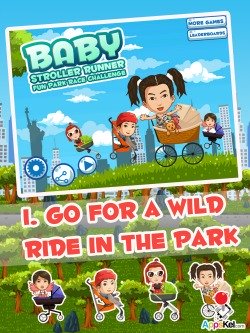 If there is one thing most people (predominately men) can attest to, there is nothing like driving around in a fast car that will get your adrenaline pumping. Why do you think there are so many NASCAR fans? Even though a lot of people don’t particularly see the draw of going around a track a bunch of times, racing games put you in the driver’s seat and then you can really appreciate the genre and the sport (yes, race car driving is considered a sport). One of the main reasons these games do so well with iOS devices is because they can make the game more immersive, thanks to the motion control capabilities. With the ability to control the car when you move your device, it makes you feel like you’ve got your hands on the steering wheel!

What Makes These Games So Great?

There are different types of games in the racing genre, but most people prefer car games and motorcycle/ bike games. No matter what kind of racing you’re into, you will find that they all have one thing in common—excitement. You’re probably wondering what is so exciting about sitting on your couch and moving your phone like a steering wheel. Hear me out!

Have you ever been driving and there is some jerk who is being really aggressive? You don’t want to let them get around you, so you speed up (disclaimer: I’m not saying to go out and race on the highway! I’m just throwing out an example. Racing on non-raceways is dangerous and stupid because you can seriously get hurt). After some back and forth of you being in the lead and then the other guy… It can be a little exciting proving that by being a jackass won’t get him very far.

You get a similar feeling when you are playing these games—except there is no real danger if you happen to crash into a wall or another car.

Oh, but racing isn’t just driving around a track multiple times. Many of these games give you side challenges like drift missions you’ll see in Asphalt 7: Heat to knockout races where you knock out your opponents with special weapons like in Death Rally. These new (and sometimes addictive) elements take racing to new levels.

Like most games, people want the best visuals they can get, and for the most part, these games give you just that. Not only do they give you beautiful visuals, they also have some of the best looking cars—cars us common folk only dream of racing. I mean, when will you ever get the chance to drive a Pagani Zonda Cinque that you’ll find in Need For Speed: Hot Pursuit? Granted, while driving it in a game isn’t the same as driving it in person (obviously), but it is still pretty cool. But the real life cars aren’t the only thing that draws people in.

Racing games that have a fun element to them, like Sonic and SEGA All-Stars Racing for example, definitely speaks to the younger crowd with its Mario-Kart feel. These whimsical games with their bright colors, fun characters, and quirky game play can be just as enjoyable as the more hardcore racing. It all boils down to preference. One thing is certain though, these games are definitely a big hit among iOS users.