Shooting Games Cause for Concern? 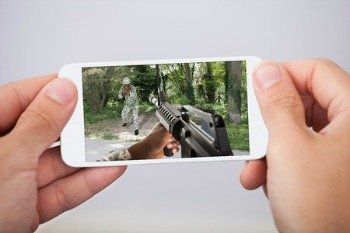 Whether it’s first person or you’re shooting from afar, shooting games have been known for ruffling a few feathers ever since gaming began. I bet people were up in arms when Duck Hunt was first released all those years ago on the original Nintendo console. But the whole genre has changed over the years. Instead of an invisible gun that only shows cross hairs when aiming, you are put face to face with realistic guns and weapons. You commandeer pirate ships and blast enemies away with cannons. You are sent on missions that smack you in the middle of war front territories. Yet, despite it all—these games, with all their violence, are some of the highest ranking games on the iOS market.

The Ratings Blow Up on iOS

iOS shooters have some pretty bit ticket names on their list. Names like Assassin’s Creed: Pirates, Deus Ex: The Fall, and Call of Duty: Strike Team are just some of the heavy hitters. These games put you right in the middle of all the action, blasting your way from hiding spots and vantage points. Perhaps these are the types of games people are afraid of because they are hyper-realistic  and they pit you against a human enemy? You certainly don’t hear people causing a scene with free shooting games like Major Mayhem or Zombiewood. I guess cartoonish characters and zombies deserve to die a pixelated death.

In a world that is becoming more and more violent, should these games really be the main topic of concern? People claim that the violence we see in these games and the movies we watch are damaging to our children and making them want to commit crimes. That is hardly fair considering all the real life traumas that we see on the 5 o’clock news on any given day. If people really wanted to see murder and mayhem, you would just have to catch up on world events. It is implausible that shooting a few monsters or blowing up a hoard of zombies is really going to turn mild mannered Jimmy into a machine gun wielding madman. But, then again, this is coming from the opinion of a gamer.

What it all boils down to is letting people make their own choices. Yes, there have been a few nut jobs who really take cues from shooting games and go all Rambo on people; but that doesn’t mean the genre is the cause for concern—the people who are playing the games are. Just because people are wielding a gun in a video game does not make them blood thirsty. There are plenty of games where you are using swords, bows and arrows, magic, and knives. These people aren’t going around killing people; so why is it fair to zone in on this particular genre? It is not fair and unfortunately, it is not going to change any time soon. I suppose all we can do as gamers is bunker down with our iOS devices and shoot some zombies and save the brains of the close-minded folk.